This is a game of war, only on a much smaller scale.

RULES:
-No God Mode. (instant win and all that)
-No taking all the land. (be reasonable)
-No Instantly Blowing up the World and killing everybody.
-After you attack, wait for the other player to defend or retaliate. If they do not retaliate in 48 hours you win uncontested.
-No interplanetary travel
-No nukes, ICBMs (regular missiles ok) or other uberkill weapons.
-You must wait a reasonable amount of time for other players to join before claiming extra land.
-Research projects must a fair amount of turns to do.
-You can have two countries at a time, but it is recommended that they stay neutral to each other. 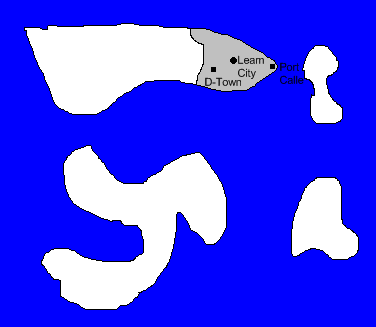 Also, to make things less confusing, if someone wins war they get to make the new thread. This is a matter of choice, and war does not have to continue. 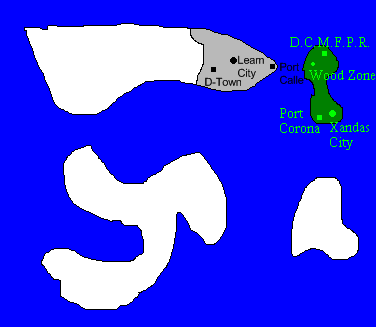 The new land of Xandas, on the islands far west of the second War thread in SMWC, are being slowly populated. They're starting anew, no previous weaponry or anything. Princess Blast, heir to the throne of King Giga (if he ever dies, which he probably won't, due to artificial preservation - he's already two threads old, or two hundred years), leads the small country - a new Xandas City and D.C.M.F.P.R. are quickly built, as well as a port heralding Queen Corona. Forestry is found as well, and is named Wood Zone out of habit. The northern part of the island, including the northern quarter of the Wood Zone, is all near-arctic, and south of the forest is fairly temperate. The land is mostly flat, with a few rolling hills here and there. A large railway, which cuts straight through Wood Zone, to D.C.M.F.P.R, is being built now. It'll be done pretty quickly. Roads between Port Corona and Xandas City have already been built from the time of arrival, and Princess Blast immediately orders D.C.M.F.P.R. to start working on getting her army some weapons. She's easily excited, by the way, and very hot-headed.

A monitor flickers to life in Princess Blast's room.

Giga: "Hey there, honey. How's it going?"
Blast: "Oh, you know me, daddy. I've got everyone possible working on that railroad to your weapons research facility, but it won't be done for two more days. And you didn't give us any weapons to start out with! How am I supposed to-"
Giga: "Now, Blast. No conquest for now. Be patient."
Blast: "Aww, but daaad!"
Giga: "No buts. If I see you trying to take over some neutral country and starting a war as soon as you reach the damn country, I'm coming over there and taking this from you. Not everything is war."
Blast: "Aww... Alright. No war, no invasions, no provocative stuff... for now." *She winks, and quickly cuts the transmission.*
Giga: "Blaze! Don't-" *kssssssssssh* "Damn it... I swear, that girl's gonan drive me nuts. Cor?"
Corona (also preserved): "Yeah, hon?"
Giga: "How're the citizens?" ...

The story above is assuming me, CK, and Demonsul make a joint victory in the current war thread at SMWC, and complete our win, by taking over The Great City, Perroth, and Artesia.

CM 2.0 surveyed the land. He was a robot, designed by the top professional R&D team in META, back on the Broniminan mainland. Designed to replace the old Cyborg Mario model which had been deactivated long ago. How distant that was. They might as well be on another planet.

"Well, here we are," said CM2 to nobody in particular. This was the edge of the map, the furthest from any action they could get. The Outer Broniminan Territories. A rocky scrubland at the best of times, with only one real city to speak of. Of all the places on the globe, of all the people, he had been landed here. To rule over this little shard of worthless land.

Stretching a robotic limb, CM2 climbed down from the hill and back to the city of Retun. The sprawl of low buildings was the only city in the OBT, but it didn't look worthy of being called anything better than a slum.

Upon reaching the Imperial building, CM2 settled down to plan how he was going to make better this worthless land. First, he sent letters of peace to all surrounding countries; the fact he had all of the old Cyborg Mario's memories implanted in his brain was not merely a triviality. War was a serious business.

Blaze: "Hm? What's this?"
Guard: "Your highness, that is a letter of peace, from a neighbouring country. The return address says it's from Bronimina; one of two countries that your father had an alliance with." *Blaze's advisor walks into the room, and the guard leaves.*
Advisor: "Oh? You've got the letter? You really should agree, Bronimina has been our country's ally since before you were born. Remember Uncle Demonsul?"
Blaze: "Oh! Yeah, I remember him! He had such awesome stories. I wonder if he can come visit some time."
Advisor: "I'll look into that for you, your highness."
Blaze: "C'mon, Rob, I told you that you don't have to call me that when Daddy's not around."
Advisor: "I would rather, though."
Blaze: "Ah well. Tell this 'Cyborg Mario' that I accept. I'm getting a bit impatient about getting more land, though."
Advisor: "When the railroad is finished, more scientists can go work on the weapons. Just wait a while, please. It won't be long now, just a little under 23 hours."
Blaze: "A whole day?"
Advisor: "They're working as hard as they can."
Blaze: "Well, I guess it's alright. But see if they can't work any harder - one hundred and ten percent, eh?"
Advisor: "I will. Goodbye for now, your highness."
Blaze: "See ya, Rob." *Rob leaves. Blaze turns on the comm link.*
Giga: "Doo doo doo, Panel de Pon... Hm?" *Giga pauses his game of Pokemon Puzzle Challenge.* "What's up, honey?"
Blaze: "A country named 'Bronimina' just sent me a letter of peace. That's what Uncle Demonsul rules over where you are, right Daddy?"
Giga: "That's right, hon. Demonsul's a pretty benevolent ruler... I didn't think he'd be so eager to expand more, though. I'll ask him about it when I get the chance. Who sent the letter?"
Blaze: "A 'Cyborg Mario 2.0'... I'm not sure about this." =\
Giga: "Cyborg Mario? Where have I..." *Giga turns away, and seems to type in something on an invisible keyboard.* "Ah. I'm definitely going to ask Uncle Demonsul about this."
Blaze: "What's wrong, dad?"
Giga: "Nothing, it's just a suspicion. Corona, do you mind if we put this on hold?"
Corona: "Not at all, dear. You go ahead, I'm sure it's much more important. I can wait." =)
Giga: "Alright. Blaze, you don't need to worry. And no invasions, got it?"
Blaze: "Okay, dad. No invasions. Only uninhabited land."
Giga: "That's my girl. I'm off. Go get yourself some lunch, okay?"
Blaze: "Alright. You too, dad, and mom. Love you!"
Corona: "You too, hon. Byes."
Blaze: "Bye!" *She turns off the comm link, and goes to see what the chefs are cooking up for lunch. Giga goes off to find Demonsul, who hasn't aged a bit during the two hundred years he's been ruling his country. Corona changes the channel on the TV, and turns on the latest Mario game, setting the controllers for the game she and Giga were playing to the side, so she wouldn't accidentally unpause the other game.*

Small defensive forces are established along the borders. Economy invested in; CM2 is pleased by Glastitech Corporation's support. So long as they make a profit, they're happy.
_________________
It's all over.
View final report
Crystal King

Are we allowed to be 2 different people (countries, rather)? If so, I want to introduce someone to you guys...
(I'll edit in my land and crap when I get a response from grish.)

Yes you are. However, I would recommend being neutral to your other country. It's unfair if you have two countries and they gang up on another country, and it's also just stupid if you fight yourself. You would know the outcome of the battle before it even started. This is only a recommendation, so you can do whatever you want with this. You can only control two countries at the same time, unless one of the countries splits for some reason. But don't go out of control, please.
_________________
YESH!!!
Demonsul

Local economy is strengthened by Glastitech monopolizing several markets. Smaller businesses collapse as the transnational takes over a few economic niches. Things are currently cheap in the Outer Broniminan Territories.
_________________
It's all over.
View final report
BloodyToothBrush 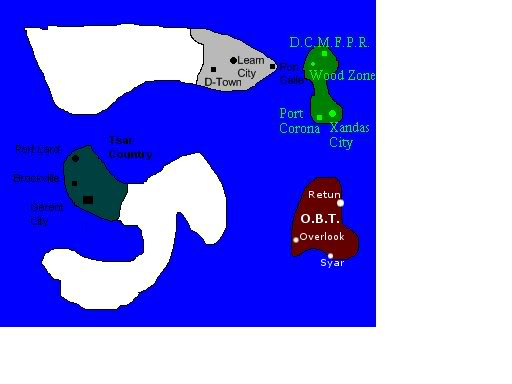 After watching his father's kingdom burn to the ground, Prince Timothy Tsar takes his legion of men and builders on boats in hope to find new land. After two months at see they come to a land rich in berries and wild life. They decide that this might be a nice place to start over.

Agh! You break my head!

It's not JUST JPEG. It has a border, and it's come out even crappier than usual!

Demonsul wrote:It's not JUST JPEG. It has a border, and it's come out even crappier than usual!

Here, here take all my money, just dont hurt me or my children mr mod person 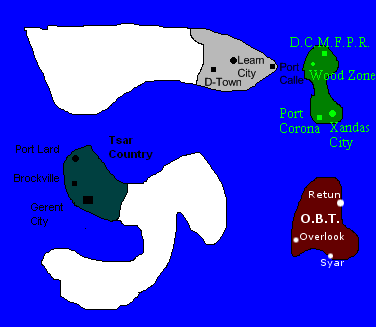