This'll be both for fun and for free Giga Points. Basically the person who gets the best time in a recording of the game specified, doing the task specified, will win the most Giga Points. Here's a chart.

And there'll be Achievements too. Here's another chart.

And the first game! This was copied straight from a different forum. 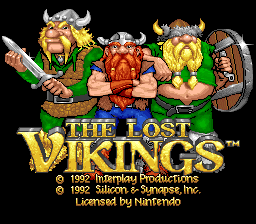 ~ Slowpoke - Complete the level in under 20 minutes.
~ Ah, shit. - Retry the level once, and no more
~ Combo Breaker - Make two consecutive hits on Tomator during Erik's solo fight (The red-bearded guy)

~ Fastpoke - Complete the level in under 10 minutes.
~ Defiant - Let all your Vikings drop to one hit point, and still win
~ Bombcrap - Bomb all three platforms in one run in Olaf's solo fight (The first one)


DOWNLOAD MATERIAL AND scriptS: Rom and Savestate. Password for the rom is "uhohroms", without the quotes.
Emulator

I should probably make a run of the stage myself, showing the whole thing off. If you've never played The Lost Vikings before, then I suggest you play through the first few levels to get a feel for the game, at least until the first time warp.

You can PM entries for this to me. Include your run through, named "TLV-*name*.smv" and replace *name* with your username, for example, mine would be "TLV-Giga.smv", inside "TLV-Giga.rar" or .zip or .7z or what have you. Also include the achievements you got, since I won't look through the run to see which ones you got, only to confirm.

I'm a bit confused. Do you have to get all of the objectives in the rank to get it, or does it count for each? And does it stack from rank to rank (ex. combo breaker and ___ the fierce)? And what's with the due date?
Giga

Congrats, Giga. You found a speedrun hard enough to seriously piss me off. I can make it as far as the Erik Solo while completing all possible achievements (minus the only one retry).

EDIT: More pissed than ever. I recoreded a practically perfect run, but forgot to erase my previous takes, and now it's ruined. Talk about evil.
_________________
~I don't wanna be a foot-note in someone else's happiness~
~I'm a bad dream that I just had today.~
Trelic

T_T
I don't know why, but the snes9x video recorder is going loopy on me. I beat it perfectly, but it somehow skips important frames in-games and ends up making me lose. WHY?
_________________
~I don't wanna be a foot-note in someone else's happiness~
~I'm a bad dream that I just had today.~
Giga

Seeing as I can hack give myself earn Giga points without trial, I don't mind Trelic winning hands down. He can have the points.

» JOIN MY CLAN AND GET XP POINTS FROM THE LEADER
» Rare Points
» [Joke challenge] Yo mamma is so fat...
» The Deloitte/FIDE Chess Rating Challenge
» Necas Trophy Wall Diorama from Predator 2
Current date/time is Wed Oct 28, 2020 2:14 am